A full but easy day walk giving a magnificent and varied circuit above and around the high mountain village of Cervières – 9km east of Briancon. 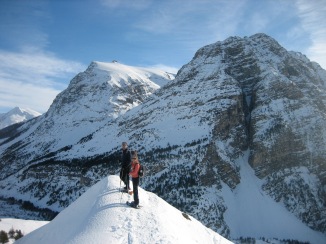 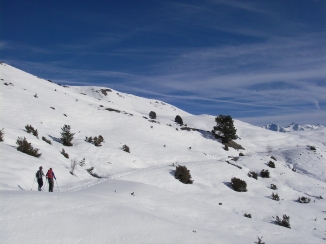 The route starts from the église St. Michel which sits prominently just above the village. An easy ascent follows the hiking path and snow covered slopes heading north from the church. The path soon enters an open river gorge. Here there is some spectacular scenery in the form of huge icicles draped on the cliff walls and free standing limestone towers. The route steepens up a little but after an hour of climbing the summer hamlet of L’Alp du Pied is reached. Here is a great place to have a rest, explore the architecture of the large wooden farm houses and take in the amazing vistas…..to the south towards the Col d’Izoard and the prominent peak of Roche Brune, to the east over rolling snowy terrain to the peaks lining the Italian frontier and westwards to the high glacial peaks of the Ecrins – Mont Pelvoux (3943m) and Ailefroide (3954m).

The route now continues in a northeasterly direction and follows the line of the water intake for Cervières. As you gain height steadily the tree line is soon reached and the terrain becomes more open and rolling. After a further hour the highest shepherds building is reached – the Bergerie de Peyre-Moutte. This is the highest point of the route at 2150m and is another fine view point. Across the valley the layered rocks in the huge cliff face of the Le Lasseron (2702m) catch the eye as well as the peaks of the Ecrins out to the west.

Continuing on a small col is reached where an old military bunker housing can be visited. Also high above there are some fortifications perched on the ridge – all part of the fortifications that once guarded Briancon. Also keep an eye out for chamois as there are usually some around in the sparsely wooded terrain – this area being a reserve for the animals.

Although it is tempting to continue traversing the upper paths in such great scenery a return to Cervières is required and the descent back through the forests must be followed. En route there are numerous spots for posing in front of the cliffs of Le Lasseron. The descent is relatively easy but care must be taken to keep left and avoid the steep slopes directly above the Mur des Aittes (another relic of past war time) which traverses the valley bottom and once guarded the entrance to Cervières from attack.

After the “mur” the route descends easily, meeting the nordic ski tracks and very soon the village of Cervières.

This trek is just one of many options in and around Briancon and La Grave. Fully guided trips of single or multiple days can be arranged with Darren McAulay of French Alps Trekking www.frenchalpstrekking.com 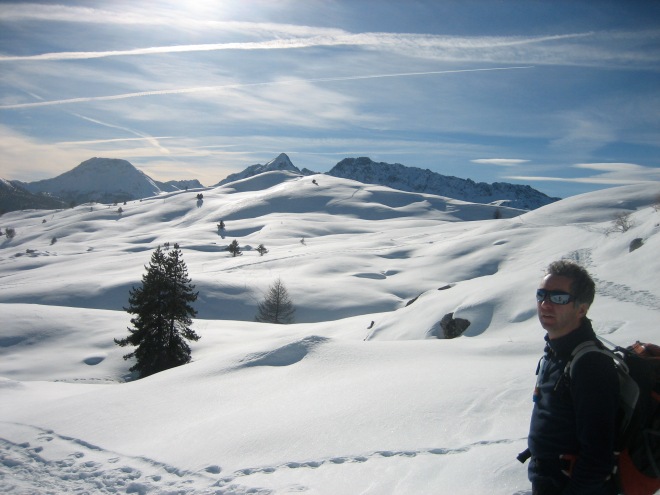